The Peter Marsh Chase at Haydock is often a race that points towards staying chasers to keep an eye on. Many of those that run well will end up going back to the same track for their Grand National trial before going to Aintree. The two horses to dominate this year’s renewal were Vintage Clouds, the winner, and Definitly Red, the horse to chase him home in second place.

However, despite that, only one of them will be heading up to Aintree in April, although both could come back to Haydock for the trial race next month.

Vintage Clouds is the horse who won’t be heading to the Grand National. This is a huge change in plan since November when connections were aiming the grey at the big race. However, another poor performance in the Becher Chase in December and it looks like Vintage Clouds just doesn’t like the fences. When asked after the Haydock race, jockey Danny Cook was quick to mention that the horse had really struggled over the Aintree fences in the past, and it wouldn’t be fair to ask him to go there again.

Instead, there appears to be three other target races for him to run in this season after his impressive victory. The first is the Grand National Trial back at Haydock next month. Then it is on to the Cheltenham Festival for the staying handicap. And finally another trip to Scotland to run in the Scottish Grand National in April. That race is run a week after the main Aintree Grand National 2020.

The signs were there from Vintage Clouds last time out. He ran a really nice race at Haydock in bad conditions and followed that up with an even better performance on Saturday. While Aintree is not on the agenda now, expect him to go well in the other staying chases that he contests between now and the end of the season.

As for Definitely Red, the plan with him is to target the Grand National. He has run in the race once before, back in 2017 and was traveling nicely when his saddle slipped. As a result, he was pulled up by jockey Danny Cook.

Since then he has been running very nicely across a number of graded contests. That includes a run in the Becher Chase earlier this season. He finished a worthy fourth place with jockey Henry Brook saying he was doing his best work at the end.

From there he went to Haydock to the Peter Marsh Chase. He stayed on very nicely behind Vintage Clouds, moving from fourth to second two fences out. From there he rallied on to take second place from Geronimo by a head. He also looks as though his campaign has been based around slowly bringing him up to full fitness ahead of the National in April, so there could well be a little more to come from him.

The plan with him is still undecided but he will almost certainly get a Grand National 2020 entry. The Grand National Trial at Haydock is also a possibility for him, which would give us a rematch between the front two here.

Given that the Trial is held after the National weights are revealed, it would be no surprise to see a far better performance from Definitly Red. He looks to have been trained with the back end of the season in mind and could be a horse that is about to spring into life. If he is then based on his solid effort on Saturday, he is certainly one to keep an eye on. 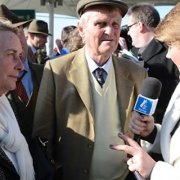 2020 Grand National: 105 Horses Get Entries in the World’s Most Famous St...
Scroll to top