On the run up to last season’s Grand National, there was a lot of buzz about the Sue Smith trained Vintage Clouds. As one of the few grey’s to even get an entry, he garnered a lot of fans very quickly. And for good reason. He ticked a lot of boxes including a reasonable weight of 10-04, was nine years old and had a solid track record with decent form to back it up.

In fact, just weeks earlier he had placed second at the Cheltenham Festival in the Ultima Handicap Chase. That said, no horse is perfect and Vintage Clouds was going to have to buck the trend that Grey horses simply don’t win the Grand National. Statistically, the odds are stacked against them. Only three grey horses have ever won the event and other than Neptunes Collonges in 2012, you would have to go back as far as 1961 to see Nicolaus Silver win it. Before that was The Lamb in 1868 and 1871. It really is that rare.

And then he fell at the first fence under jockey Danny Cook. Thankfully there was no injury and all connections to could do was wonder what if…

Fast-forward seven months and the plan has now been confirmed that Vintage Clouds will indeed be returning to Aintree for the Grand National 2020. First though, he will also be making his way to Liverpool for the Becher Chase in December. Sue Smith will no doubt be hoping that he can improve on his recent performance at Kelso where he could only manage fifth place from seven runners.

For that race, on October 26th, he was burdened with top weight of 11-6, which wouldn’t have helped his chances on his seasonal return. Aside from the weight, his actual run wasn’t particularly inspiring. He stayed with the leaders for most of the race and was always there or there abouts. But by the ninth fence, with five left to jump he was almost completely out of contention. In fact he struggled badly at the rear and had to be rallied on quite vigorously by jockey Danny Cook. The fact that he managed fifth place is only down to how quickly Sharp Response and Blue Flight faded in the closing furlong.

So it looks like Sue Smith and her team still have plenty of work to do with Vintage Clouds if they want to get him primed and ready for next year’s Grand National. A run in the Becher will definitely be more of an indicator as to how good his chances are. At the moment, bookmakers are offering ante-post odds of around 40/1 on him, which isn’t a bad bet because he is a solid and dependable chaser.

Can Vintage Clouds defy so many Grand National stats and return with a winning performance on April 6th 2020? Only time will tell. 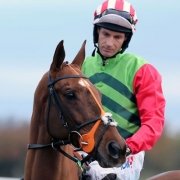 Aidan Coleman Rides a Winner at Every British Jumps Course