It’s the question we all want to know the answer to. How do much does a jockey get for winning the Grand National? Before we get to the answer we have to take a look at how the prize money is divided up.

With one of the biggest prize funds on offer for any race in the UK, £1,000,000 is up for grabs in the Grand National. Not all of it goes to the winner, in fact, it is shared between the connections of the first ten horses and riders to cross the finish line.

Of course, it’s a huge amount if you happen to win, but probably not so much if you place 10th! When we say it is shared between the ‘connections’ that means the owners, trainer, and jockey. That split can vary slightly depending on agreements but the general rule of thumb is:

The split is higher for Jumps racing than flat racing for jockeys and the difference is from the owners cut. So in terms of how much a jockey gets for winning the Grand National, it is approximately £50,000. They also receive a flat fee of £120 for riding in the race.

You may think that £50,000 is not bad for a day’s work but don’t forget that taxes must be paid on the money. Plus if the jockey has an agent they must also get their cut. And if you happen to ride home in 10th place, then you only get a paltry £100.

Like all wages and earnings, there is a process to getting your hands on the winning money. Weatherbys is under contract to the British Horseracing Association and they register all thoroughbred horses in Britain and Ireland. They are also the keeper of the money!

If you are a jockey, owner, syndicate manager or trainer in the UK, you basically set up a bank account with Weatherby’s. Everything you earn is then lodged in that account for you to withdraw. There is a very good reason for this.

Funds from racing come from a lot of different sources. Weatherby’s job is to collect all that money and then distribute it between the winners. Funds come from owners’ entry fees, racecourses, and Levy Board contributions.

Connections of winning and placed horses are then registered and prize money is usually credited to Weatherbys Bank/BHA accounts fifteen days after the race. That allows the time needed to ensure mandatory drug tests are completed.

With £1,000,000 up for grabs, it’s easy to see why the Grand National is one of the most lucrative races in the UK. But the prize fund has seen huge changes over the last number of years. The million pounds only began in 2014.

When Ballabriggs won the race in 2011 for trainer Donald McCain Jnr, the total distributed was £935,465. And that was split between the first eight horses home, not the ten we see today.

Ordinarily, in those days, the £500K was split between the first six home. The winner used to get £290,000 so with fewer horses in the winning mix, the connections all got more money than they anticipated.

Most Money Won By A Grand National Winner

Clearly, with more prize money in recent years, horses that win multiple times will far out-earn any horses from the past. With Tiger Roll winning two Grand Nationals, he has won the most money.

So who will take the crown next season? Will we see Tiger Roll back for a third win or has his chance passed. Will see a first with a female jockey taking the honours or will we get another 100/1 winner.

So many questions. Only time will tell which winning horse, jockey, and trainer will enter the history books. 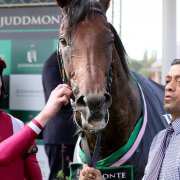 The Highest Earning Horses in Racing?

The Lasting Charm of Horse Racing
Scroll to top