Despite the fact that this is a website largely dedicated to statistics about the Grand National, there are times when we turn our attention away from National Hunt racing.

When we talk about the highest earning horses in racing, they will always come from Flat racing. That is because the prize pots are significantly bigger. A good horse can win two or three multi-million dollar races and instantly be the highest earner in a season.

Because of that, horses winnings have reached a record high thanks to the world’s most elite flat racing events.

On the 7th of June 2014, millions of people around the world tuned in to watch outstanding equine athletes compete in The Derby at Epsom Downs Racecourse. After a breathless few minutes, Irish-based trainer Aidan O’Brien was rewarded with his second win in three years with an emotional victory for his horse Australia.

It was his third in a row and not only significant for O’Brien but it also reflected trends by analysts that showed horses winnings reaching record highs.

Eight years later and money up for grabs is even higher. The 147th annual Kentucky Derby at Churchill Downs was worth over $3m dollars in 2021. The winner, Medina Spirit, would have been the beneficiary of over $1.86m however the horse failed two drug tests so the outcome is still in dispute.

The 2021 Saudi Cup boasted a prize pot of $20m with the winner taking home $10m. That was Mishriff with jockey David Egan on board for British trainer John Gosden. In total, the Saudi Cup day card carried a total prize fund of $30.5m.

Highest Earning Horses Of All Time

Did you know that the top seven Thoroughbred earners of all time, have combined winnings of over $100,000,000? That is quite staggering and it is broken down as follows:

3. Gun Runner – $15,988,500
With 11 wins from 18 starts, Gun Runner ended his career by winning the Pegasus World Cup in 2018. That was after he won the Breeders Cup Classic just two months earlier. Those two races alone added a hefty £8m to the coffers and propelled him up the leaderboard of highest earners.

4. California Chrome – $14,752,650
Named after his owner’s ties to California and his chrome coloured coat, California Chrome ran in 18 stakes, winning 10 of them. His first big win in the Santa Anita Derby in 2014 put him on the map and he then went on to win the Kentucky Derby and Preakness Stakes in the same season.

6. Maximum Security – $12,431,900
Maximum Security announced himself in the upper echelons of flat racing when he won the Kentucky Derby in 2019. However, as he had badly hampered another horse in-running, it prompted an inquiry and the stewards unanimously decided to demote Maximum Security to 17th place. Undeterred, he continued racing and won the Saudi Cup in February 2020.

7. Espoir City – $11,443,812
Hailing from Japan, Espoir City earned his money almost by the sheer number of races he ran in compared to some of the others. From 29 starts, he won 12 and was second in eight more. Though he never won any of the major races, he racked up enough of the half-million pound wins to put him in 7th place on the highest earners.

With the door closed on the flat racing season for 2020 the top earner was Authentic who took home a whopping $7,170,000.

Trained by Bob Baffert, Authentic ran seven times in 2020, winning five of them and finishing second in the other two.

His first race was the Sham Stakes in January and for that, he took home £45K. Fast forward to November and he had the Longines Breeder’s Cup Classic in the bag, worth £2.3m. And that was after he won the Kentucky Derby in September worth another £1.4m.

As the season hasn’t yet finished that is still a closely fought contest. Essential Quality leads the way on earnings of $2,880,000 and an 83% win rate. 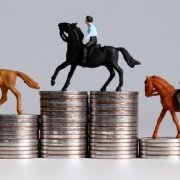 How Much Do Jockey’s Win In The Grand National?

9 Horses and Humans Who Made History Together

Because these cookies are strictly necessary to deliver the website, refuseing them will have impact how our site functions. You always can block or delete cookies by changing your browser settings and force blocking all cookies on this website. But this will always prompt you to accept/refuse cookies when revisiting our site.