It was another Grand National spectacular at Aintree on Saturday. Despite less than ideal circumstances and no racing fans in the stands, the organisers at Aintree and ITV put on quite a show for the viewing public. But how did the race pan out and what were the stats that made it so interesting?

First off, we can’t go any further without mentioning the winner – Rachael Blackmore on Minella Times (11/1). The first female jockey to ever win the race, she rode straight into the history books on board the 8-year-old for trainer Henry De Bromhead.

Owned by JP McManus, Minella Times was one of seven entries for the Irish super owner. The Ted Walsh trained Any Second Now finished in third place. However, the rest of the McManus horses did not complete the race.

Statistically, JP McManus owned 17.5% of the runners in the 2021 Grand National so he was always bound to have one or two do well!

40 runners and riders started the race on April 10th 2021. 15 completed the race, with 25 falling by the wayside as the race progressed.

All of the other finishers weighed 10-09 or less. So no horse that was allocated a weight of 11-00 or more even completed the Grand National.

Top weight, Bristol De Mai, pulled up just after the 21st fence having made a mistake at the 7th fence which he never fully recovered from.

The lowest weighted horse in the race was 12-year-old Blaklion. Having first run in the race in 2017, this was his third attempt and he finished in 6th place.

It has taken 173 years for a female Grand National winner but now Rachael Blackmore has permanently written herself into the history books.

In 2021, three female jockeys took part in the race. Blackmore was paired with Minella Times, Bryony Frost was on board Yala Enki, and Tabitha Worsley made her debut on Sub Lieutenant.

This was only the second time that three female jockeys made it to the starting tape. The first time that happened was in 2018 when Katie Walsh, Rachael Blackmore and Bryony Frost rode in the race.

The best finisher that day was Frost who guided Milansbar to 5th place. Previously the best finish from a female jockey was Katie Walsh on Seabass in 2012 when the pair finished 3rd.

Earlier in April 2021, a 150/1 long shot won the Irish Grand National at Fairyhouse. Freewheelin’ Dylan stunned bookies and fans by leading from the off and staying there. A credit to his connections, it proved that anything really is possible in racing.

While a long shot did not win the Aintree National in 2021, Balko Des Flos, also from trainer Henry De Bromhead, came second at 100/1.

Also in the mix was Blaklion who placed 6th at odds of 50/1. Jett and Cabaret Queen also made it into the prize money – both on 80/1.

Age Of The Runners

One aspect of the 2021 race that sticks out is that another 8-year-old won the race. Traditionally, this race has been more suited to older horses, generally those aged between 9-11.

The nature of the race lends itself to those with proven stamina and that often comes with age and experience. However, the last 10-year-old to win the race was Ballabriggs in 2011.

Continuing the theme of dominating racing in 2021, the Irish trainers once again reigned at Aintree.

Over the 15 finishers, the first five home were all Irish trained. In fact, nine of the first 10 home fell into that category. The only British trainer to finish in the top 10 was Dan Skelton who saddled Blaklion.

Georgia Howell (Sub Lieutenant) and Jamie Snowden (Hogan’s Height) were the only two other British trainers to have runners finish the race.

Willie Mullins saddled four finishers with Denise Foster on three. Though with the prize money cut to £750,000, rather than £1 million, they did go home with less than in 2019.

So will they all be back in for the 2022 Grand National? We have just under a year to find out but no doubt the time will whizz by. And fingers crossed we’ll have fans in the stands when it eventually rolls around! 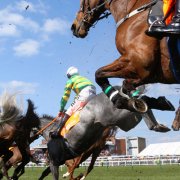 9 Horses and Humans Who Made History Together
Scroll to top